TERMINALS AT THE PORT OF BARRANQUILLA 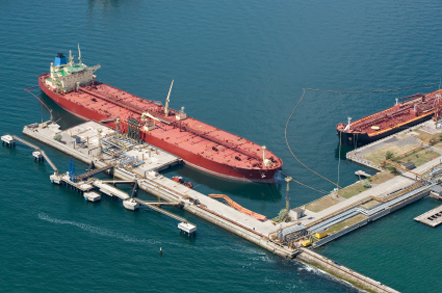 Port terminal located about 11 miles from magdalena river mouth
Number of piers: this pier has about 1,058 meters long...

This pier/yard is specialized for loading coke and steam coal.
Max draft: the same as the river mouth and the navigational channel...

Number of Piers: 2
Max. Loa: this restriction has not been determined by the port but it has...

It is compulsory for all domestic/foreign flag vessels over 200 GRT, to use pilot for entering/departing, as well as shifting between berths in the port.
Pilot boarding takes place 1.5 miles NW of breakwater. Vessel must arrange a pilot ladder 2 meters above water level on starboard side.

It is compulsory for all vessels over 2,000 DWT to have tug assistance for berthing, unberthing, anchoring, mooring to buoys and entrance/sailing maneuvers to dikes. Pilot may request a second tug, depending on sea & weather conditions.
Due to strong river current and wind conditions in certain periods of the year, port authority has determined that vessels fitted with bow thruster / controllable pitch propeller are still required to have tug assistance when maneuvering inside port premises.

For vessels below 2,000 dwt, tug assistance will be decided by master & attending pilot depending on weather conditions.

Due to Port Authority requirements, vessels must berth on starboard side to any of the berths in this port. Vessels with loa less than 100 meters can dock portside, only with a previous authorization from harbour master and a letter of indemnity to the pilot company.

DOCUMENTS TO BE PRESENTED TO LOCAL AUTHORITIES

Ship?s navigation registry
Radio station license
Load line certificate
Sanitary certificate cargo gear certificate (if vessel loading/discharging)
Radiotelegraph and radiotelephone certificate
Cargo ship safety equipment
International oil pollution policy (IOPP)
Last port clearance
Manning license of crew members
Insurance certificate of entry of P&I Club
In addition to the above documents, master should have the following documents ready to be handed to the local authorities
4 copies of cargo declaration
4 copies of store list
6 copies of crew list
4 copies of passenger list, if any
3 copies of crew effects
1 copy of maritime declaration of health
Failure to comply with above documents may result in ship?s delay in port until all documents are presented to satisfaction, with consequential increase in port expenses.
Please confirm all these documents will be available on ships arrival.
Furthermore, the following information required by the harbour master is necessary in order to accept the arrival of the vessel to colombian ports:
Class
Class Number
IMO Number
P&I Club
IOPP number
IOPP Issue/Expiry Date

This area is usually used for anchoring the vessels awaiting berths at any of the terminals in Barranquilla.

It is also used for discharge operations of steel cargo, which are carried out by mssrs. Sidunor who is one of the most important steel cargo receivers in Colombia. They import about 150,000 mt per year and are the only receiver with a concession granted by government for discharging their cargoes at this anchorage site. The draft is the most important restriction, which is currently at 28 feet f.w. vessel?s loa, beam, airdraft restrictions has not been determined. Watchmen service it is not compulsory but strongly recommended for avoiding robbers, stowaways and smuggling.

Mssrs. Sidunor has an estimated discharge rate at about 4,000 mt/day agw/wp and work 24 hrs shinc. They have their own river deck barges which are alongside the vessel. They take cargo from holds onto barges using ship?s cranes. Usually work with about 3 river deck barges with a capacity of about 400-600 mtons. These river barges are shifted from alongside to a private sidunor quay in the riverboard.

Vessel can be supplied with bunkers and fresh water at this anchorage site. Vessel can be also provided by shipchandlers there.

Any clarification of above regulations/recommendations, please feel free to contact us prior to vessels arrival in port.